Big Basin Redwoods was extensively damaged by the CZU August Lightning Fire on August 19, 2020. Most of the park’s buildings were completely destroyed, including the historic headquarters and much of the recently-acquired Little Basin resort. No one was injured.

The park is completely closed except for the Rancho Del Oso Nature and History Center (which is open weekends only), Waddell Beach, and the half-mile-long Marsh Trail. A phased reopening is expected, with the complete rebuilding process expected to last until at least 2030.

The fire in Big Basin

During an unusually intense weeklong heatwave, a wave of moisture from a decaying hurricane set off a widespread and long-lasting line of thunderstorms, igniting hundreds of wildfires throughout Northern California.

Four fires started outside of Big Basin at about 3:30 am on August 16, smoldering for several days in the damp understory. The fires then abruptly spread through most of Big Basin, reaching almost every part of the park within about 12 hours. Now combined into a single fire, the blaze continued to spread south of the park at a much slower rate.

Since 2010 Big Basin had carried out a program of prescribed burns that, ideally, should have minimized the intensity of the fire. The burns did dramatically reduce the dense tanoak understory for years afterward, and a lot of new redwood seedlings, normally a rare sight, appeared. However, the controlled burns only covered about 10% of Big Basin’s old-growth area, and no burns had been carried out since autumn 2015 because the weather requirements were never met.

In the visitors' center area, the buildings were heavily damaged but most of the larger trees seem to be in good condition and even some picnic benches, wooden bridges, and fences were unaffected. Elsewhere, many ridgetops were completely stripped of living trees (see for example the third picture in this article); the canyon bottoms are less affected, but smaller trees still appeared to be heavily damaged.

The fire outside of Big Basin

Most of Butano State Park also burned in the fire. The campground didn't burn, but its water system was damaged.

The southern edge of the fire burned through part of the town of Boulder Creek, as well as Bonny Doon Ecological Reserve, the upper part of Henry Cowell's Fall Creek unit, the northern panhandle of Wilder Ranch State Park, and most of the San Vicente Redwoods before being stopped about a mile from the old-growth grove at Henry Cowell.

Elsewhere in California, several other old-growth groves burned in fires started by the August 16th thunderstorms:

Past fires in other redwood parks

Three other redwood forests have burned in recent years, but unlike the Big Basin fire, visitor facilities were not heavily damaged in any of these fires.

The outlook for Big Basin

Most of Big Basin’s redwoods will likely recover within a few years. Redwoods can survive fires even if all their foliage is burned off, and even if some redwoods die, enough normally survive that after 5 or 6 years it’s hard to tell that there was a fire at all. In fact, redwood forests can benefit from fire because it kills off competing trees. That’s why so few redwoods grow in Oregon; there aren’t enough fires that far north.

The park facilities, though, will be more of a challenge. Just the relatively simple task of replacing a single footbridge in an old-growth park often takes four or more years. Any significant rebuilding in old-growth forests requires a long process of drafting plans and environmental impact studies; even after the plans are approved, it can take years more for funds to be allocated. Almost inevitably, the project is delayed by lawsuits. Overall, the process usually seems to take around 10 years.

When it’s rebuilt, the park isn’t likely to look like it did before the fire. Since it had become dramatically more popular over the past 10 years, Big Basin had already been planning to move its parking lot and visitor center to the park boundary, making day use visitors take shuttles or walk several miles to reach the old park headquarters site. Sequoia National Park’s Giant Forest and Yosemite’s Mariposa Grove recently made similar changes; the result is a more time-consuming and touristy experience that's fine for first-time visitors but discourages regular repeat visits.

More information about the fire

A fire that started at a sawmill burned through Big Basin in 1904. Despite the headline, only about 2 square miles of the park was damaged.

Big Basin is only 20 miles from San Jose, a one-hour drive along twisty mountain roads. But when you arrive at the extraordinary park headquarters area, where graceful conifers rise high above 1930s lodge-style buildings, and when you step out into the crisp cool air, it feels like being at a remote mountain resort.

Middle Ridge, rising 1000 feet above the flat, divides the park into two subtly different environments. The region to the east of the ridge is in a rain shadow. Particularly north of park headquarters where the ridge is highest, this area tends to be somewhat dry-looking for a redwood forest, though it’s still remarkabaly lush by any other standard. The area is slightly less attractive because of the dense understory of tanoak trees that grows among the redwoods, reducing visibility, and because the ground is mostly bare dirt and leaf litter, giving the forest a disheveled appearance. The redwoods are not generally very large and many have been blackened by fire. The region to the west of the ridge tends to be greener and much more attractive. Sorrel and ferns cover the ground, large trees are more common, and the forest has a richer, healthier look. The park headquarters area is a dramatic exception to this pattern, with many ancient redwoods but little ground cover, suggesting that its water mainly comes from Opal Creek rather than from direct rainfall.

Big Basin is a popular park, and even in winter it can be hard to find parking on sunny weekends. On summer weekends parking in the headquarters area can fill up completely and rangers may start turning people away. Arrive before 10 am or after 5 pm to avoid the rush.

There’s a $10 fee to park in the headquarters area, but you can park for free in more remote areas like Waddell Beach, Whitehouse Canyon Road, or China Grade.

Twin Redwoods, Alder, and Butano Trail Camps are closed from November 1 to April 30 each year. Currently the other camps are open all year but don’t have trash service in the winter.

*** Redwood Nature Trail (0.6 mile)
By far the most popular trail in Big Basin, this is a very nice loop through an alluvial flat with the park’s most impressive trees.

*** Sunset–Skyline Short Loop (2.9 miles)
This loop is the best choice if you want to go for a one- or two-hour hike in Big Basin and don’t mind a little climbing. It gets you away from the busy Park Headquarters area and into some nice old-growth redwood uplands.

** Skyline-to-the-Sea Trail (25.0 miles)
This 3-day hike, which features the best of Big Basin’s redwoods, is the most popular backpacking route in the Santa Cruz Mountains.

** Hollow Tree and Meteor Trails (8 miles)
A climb through a rather dry, fire-blackened redwood forest is followed by a descent through a very nice redwood-lined ravine and then a jaunt along Opal Creek.

* Blooms Creek Loop (3 miles)
A short hike along Blooms Creek followed by a climb through rather uninteresting forest and a descent that winds around attractive redwood-lined ravines.

*** Westridge Trail (9.4 miles)
This one-way hike joins two of the most scenic parts of western Big Basin: the Rancho del Oso valley and Chalk Mountain. Between is a very strenuous climb to a wooded ridgetop.

** Basin Trail Loop (12 miles)
This hike circles the rim of Big Basin, where sunny chaparral with great views of redwood-clad hills alternates with cool, shady woods. You’ll then descend into a canyon filled with old-growth redwoods and finish the hike with a few pleasant miles of strolling through the redwoods alongside a burbling creek.

** Buzzard’s Roost (5 miles)
A 1200-foot climb to a panoramic view over Big Basin. The only redwoods are at the bottom of the hill, but they’re nice. A popular hike.

* Eagle Rock (4.5 miles)
The Eagle Rock Trail starts next to the Little Basin Campground and climbs to a rocky peak. It’s a little like the nearby Buzzards’ Roost hike but not as scenic.

**** Wastahi Campground (27 walk-in sites)
Wastahi is Big Basin’s walk-in campground, meaning that you have to walk up to 200 yards from the parking lot to your campsite. The payoff is a quieter, nicer-looking campground with more of a backcountry feel.

** Little Basin Cabins and Campground (12 cabins, 37 drive-in sites)
Although it’s in Big Basin Redwoods, Little Basin used to be a privately-owned retreat for Hewlett-Packard employees and feels a lot different than the other state park campgrounds.

**** Lane Trail Camp (6 backcountry sites)
If you want to go backpacking in Big Basin Redwoods State Park but want to camp somewhere quiet and secluded, Lane Trail Camp will probably be involved. It’s a nice backcountry camp on a rather dry-looking wooded ridge.

**** Jay Trail Camp (6 hike-in sites, 2 bike-in sites)
Intended for backpackers hiking the Skyline-to-the-Sea Trail, Jay Trail Camp is right in the middle of the busiest and most developed part of Big Basin Redwoods, but it can be a refreshing break from the trail.

*** Sunset Trail Camp (10 backcountry sites)
Sunset Trail Camp’s prime location by the scenic chain of Berry Creek waterfalls has made it the most popular backcountry campground in the Santa Cruz Mountains. It’s an attractive camp, but it’s crowded and the sites are really close together.

Getting to Big Basin

From the Bay Area, the most popular way to reach the Big Basin park headquarters is to take Highway 17 from Los Gatos to Felton, then Highway 9 to Boulder Creek and Route 236 to Big Basin. An alternate route is Big Basin Way (Route 236) south from Saratoga. This way is shorter but it’s also narrow and twisty, so unless highway 17 is clogged with summer beach traffic the two routes will take the same amount of time.

Parking in the park headquarters area now costs $10.00 per car. The park has a gift shop (closed in December and January) that also offers sandwiches, chili, and ice cream. The nearest grocery store, gas station, and drugstore is in Boulder Creek. 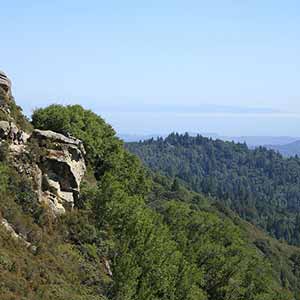 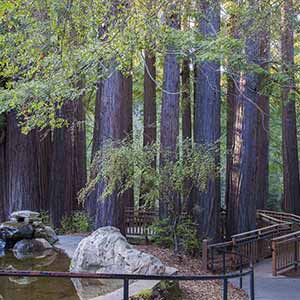