The Golden Gate National Recreation Area is a huge park with holdings primarily in San Francisco and the Marin Headlands. The park’s sweeping views and proximity to San Francisco have made it one of the most popular recreation destinations in the entire country: with 19 million visits per year, it’s the National Park Service’s most-visited property.

The park’s most popular destination is the high coastal bluff that rises up on the north side of the Golden Gate. Conzelman Road climbs the bluffs, offering some truly magnificent (and tourist-clogged) views of the Golden Gate Bridge and San Francisco. This area also has a lot of old artillery bunkers and army bases, as well as the scenic Point Bonita Lighthouse.

Further north, the park is much less developed and has an extensive network of trails. Most of the trails are in the Marin Headlands, a somewhat harsh-looking landscape of high open hills covered with coastal scrub. The trails are generally wide dirt roads that are exposed to the sun with little or no shade, but fortunately the area tends to be cool; the normal summer weather is cloudy, windy, and cold, often with light drizzle.

The view from Hawk Hill

There’s also a much more remote northern section of the park opposite Point Reyes.

Since about 2010 all of southern Marin County has become so popular with hikers that on weekends it’s difficult to find parking at any of the major trailheads south of Mount Tamalpais. It’s best to get an early start; besides the parking issues, traffic gets progressively worse throughout the day and long backups on the Golden Gate Bridge as well as on Highway 1 on the way to Muir Beach are common. The old army bases and gun emplacements around Conzelman Road are especially congested with tourist traffic.

*** Point Bonita Lighthouse (1.0 miles, 100 ft)
Point Bonita is a short, scenic walk along a dramatic, rocky coast to a promontory with a tiny lighthouse.

* Hill 88 (5.3 mi, 1050 ft)
The section of the Coastal Trail between Wolf Ridge and Rodeo Beach is one of the more scenic walks in the Marin Headlands, featuring some great ocean views and some old coastal defenses.

*** Kirby Cove Campground (March–October, $30/night + $8)
Kirby Cove Campground is tucked away in a wooded canyon among the steep hills of the Marin Headlands, next to a beach with scenic views of the strait, the bridge, and San Francisco and completely isolated from tourist-clogged Conzelman Road.

** Hawk Campground (June–October, free)
Hawk Campground is a completely free backpacking camp in an litttle clump of pine trees set among the otherwise bare hillsides of the Marin Headlands.

* Bicentennial Campground (Open all year, $20/night + $8)
Bicentennial Campground is in a relatively quiet spot between the heavily touristed Point Bonita lighthouse and Conzelman Road. It isn’t really anything special, mainly because it’s in a dense cypress grove and the trees block the signature Marin Headlands vistas. 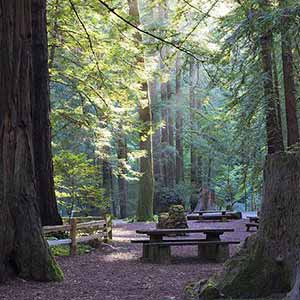 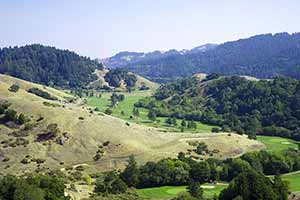 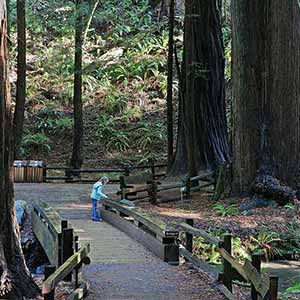