The Placer County Big Trees Grove is most notable for how much of an outlier it is. The northernmost grove of giant sequoias, it’s also the most distant from any other grove. And it’s the smallest grove, with only six living sequoias: a group of four small trees, plus two larger, isolated trees. Two more large trees fell in 1861.

The grove is very much off the beaten track, on a high ridge surrounded by deep, gorge-like valleys, about 25 miles east of Foresthill on two-lane paved roads. A few people pass by on their way to or from French Meadows Reservoir, but it’s not a very heavily-trafficked area. For the area, though, the grove is relatively popular, and on a nice summer weekend there might be three or four cars in the lot.

The trees occupy a small bowl-shaped depression with a little seasonal creek flowing through it. The bowl, especially the leafy creekside, is much more lush than the surrounding forest. Adding to the contrast, the surrounding region has been and continues to be heavily logged, while the grove itself is unlogged and has some nice lodgepole pines and Douglas-Firs. For the most part the trees aren’t especially large, though. The largest sequoia dominates the forest, but at 12 feet in diameter, it still isn’t that big for a sequoia.

The four named trees all honor World War I leaders.

From the parking lot, the Big Trees Trail descends into shady woods.

Turn right at the first intersection. The first sequoias appear at signpost 5 and are so small that you could easily miss them: three small sequoias in a row, with a fourth, much smaller sequoia in front. A nearby Doulgas-Fir (signpost 4) is much larger.

Just after the sequoias, the trail passes through an area of dense, leafy creekside greenery, and can get slightly overgrown. There are two fallen trees in this area; the second, larger one has been named the Roosevelt Tree, which seems like a dubious honor as it was named after it fell.

The next sequoia is the Joffre Tree, a tall, thin tree that doesn’t look that impressive, although it’s 10 feet in diameter. It is, however, the tallest of the six.

The trail switchbacks up the side of the bowl, reaching the Pershing Tree just after the intersection with the Forest View Trail. At 12 feet wide, this is the largest and most impressive tree in the grove. It’s still not especially big by sequoia standards, but it’s an attractive tree, and with its large fire scar and salmon-red color it really stands out in the forest.

Just a few yards later, the trail passes through a break in the fallen Roosevelt Tree. From this point, there’s a nice unobstructed view back to the Pershing Tree; a large break in the canopy lets you see the full height of the tree.

The Pershing Tree is the most impressive in the grove

A second trail, the Forest View Trail, loops around the edge of the bowl. Although the area is unlogged, the trail is nothing special and doesn’t really offer any noteworthy sights. 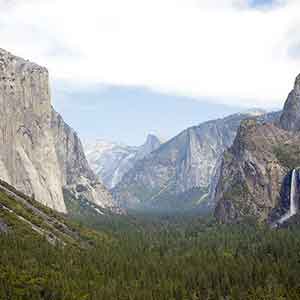 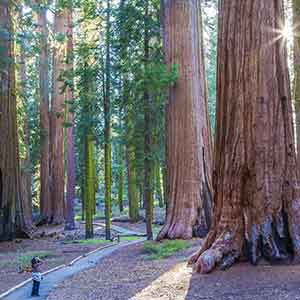 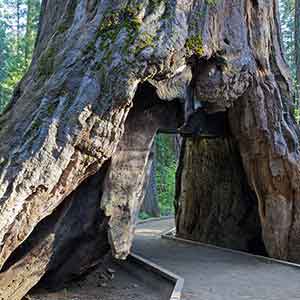