Jewel of the Midpeninsula preserves

The descent into Whittemore Gulch

Although it’s just across the street from the many preserves outside Woodside and Palo Alto, Purisima Creek feels completely different — the woods are lusher and a lot more attractive, the open hilltops have dramatic vistas of bald coastal hills and redwood-filled canyons below, and the park seems more wild and expansive. Being near the coast, the park’s redwood canyons are refreshingly cool in the summer and make a great getaway from the Bay Area’s heat. As you climb up toward the ridge, though, it can start to get hot.

Despite its name, Purisima Creek Redwoods doesn’t have any old-growth redwood groves; its two canyons are instead filled with dense stands of small to mid-sized second-growth redwoods. Especially on the Craig Britton Trail, however, the redwoods have regrown well and offer some surprisingly nice scenery.

The park has an extensive system of well-maintained trails and fire roads. Mountain biking and horseback riding are allowed on most trails. Poison oak is found throughout the park and is especially common in the sunny coastal scrub along the upper Whittemore Gulch Trail.

This loop has an especially nice combination of shady redwood canyons and open hilltops with superb coastal views. Extending from the base of the Santa Cruz Mountains almost up to Skyline Ridge, the hike feels like it has a lot of climbing, but in fact the elevation gain is a relatively modest 1600 feet. All parts of this loop are quite popular, and on a nice weekend you might encounter a group of hikers every 5 minutes or so.

It’s most enjoyable to start the loop from the lower parking lot off Higgins Purisima Road, just outside Half Moon Bay. On most weekends the little lot and the short stretch of road where parking is allowed (which together can accomodate about 25 cars) quickly fills up, and there aren't any nearby alternatives. In addition, Highway 92 to Half Moon Bay is extremely congested on summer days, and sometimes even on winter days.

It’s also possible to start from the upper parking lot on Skyline Boulevard, which is larger and a lot easier to get to. On nice weekends this lot also fills up, and parked cars line Skyline Boulevard. A sign at the upper trailhead warns that people have hiked down and had to be rescued when they couldn't hike back up again.

The Purisima Creek Trail starts as a flat and easy stroll through a cool, shady second-growth redwood forest. At the very beginning of the trail the forest is especially lush, with some good-sized redwoods growing among beds of redwood sorrel. However, the forest quickly becomes less attractive, passing through heavily-logged woods as the trail becomes progressively steeper. This is the least scenic part of the hike.

The scenery improves a lot when you turn onto the singletrack Craig Britton Trail (formerly the Soda Gulch Trail). This enjoyable trail, cut into a steep hillside high above a creek, winds around a lush ravine densely covered with second-growth redwoods and a groundcover of ferns and redwood sorrel. For a second-growth forest, there are some pretty impressive views of tall straight redwoods rising into the sky on the other side of the canyon. The trail winds around a second, larger ravine and then breaks out into patchy oak woodland. It finally climbs into sunny coastal scrub with some nice views of the redwood-covered hills to the south.

The Craig Britton Trail breaks out of the redwoods

The scenery gets even better at the Harkins Ridge Trail intersection. The environment changes abruptly the moment you step onto the ridge; stately lichen-covered fir trees line the trail, giving the area a distinctive coastal look, and there are a lot more panoramic views than before.

Turn right onto the Harkins Ridge Trail and continue climbing. This is the steepest part of the hike, but it also has some some really exceptional views of the chaparral-covered hills and the glittering blue ocean to the north. The climbing ends as you turn left onto the singletrack portion of the trail. There’s a small but exhausting climb, during which the trail passes through a small clump of redwoods that includes a few pretty good-sized trees. The trail reaches the highest point of the hike at the intersection with the North Ridge Trail.

Turn left and begin descending the North Ridge Trail. Somewhat unusually, the chaparral-covered hilltops in this area are all topped with little patches of fir and spruce forest. The North Ridge Trail descends through one of these surprisingly lush and attractive hilltop patches. There are some really impressive spruce trees here; it’s hard to tell but the entire hilltop may be old-growth. There’s some traffic noise from Skyline Boulevard, with the occasional distant roar of a motorcycle.

View from the Harkins Ridge Trail

Turn left on the Whittemore Gulch Trail, which emerges from the woods to descend through poison oak-infested coastal scrub with some of the most scenic views of the hike, the redwood-covered valley below extending toward the ocean in the distance. The trail soon descends into an open and refreshingly cool forest. It’s heavily-used by mountain bikers and has the smooth, overly-worn look common to such trails.

The forest remains quite attractive; like the ridgetop grove it’s mostly fir trees at first, but as the trail descends redwoods gradually become more common. Some of the redwoods are pretty big, and in fact there don’t seem to be any stumps at all on this hillside.

Stumps do appear, though, when the trail reaches the bottom of the steep, narrow canyon. Here it enters a dense, dark second-growth redwood forest that’s less attractive than the preceding miles of trail. The trail broadens into a dirt road,probably an old logging road, as it drops into the lower gulch. 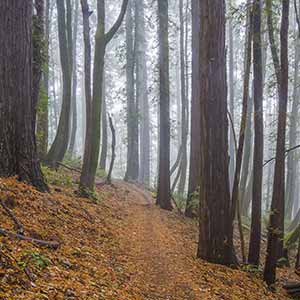 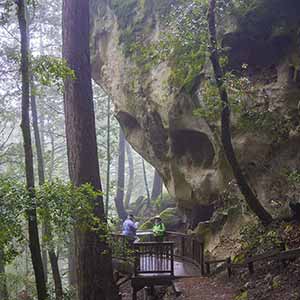 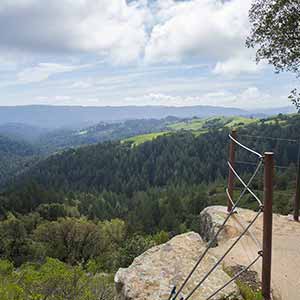 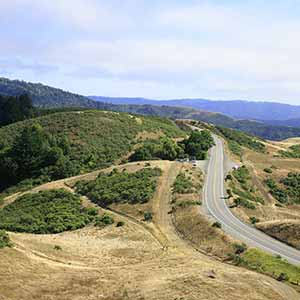 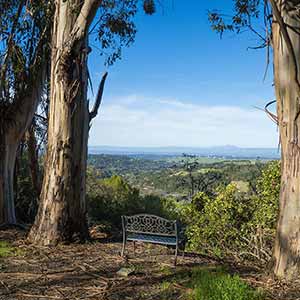 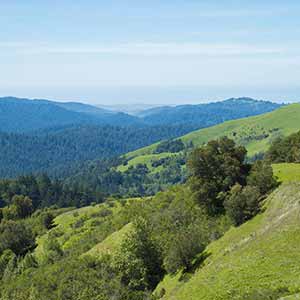 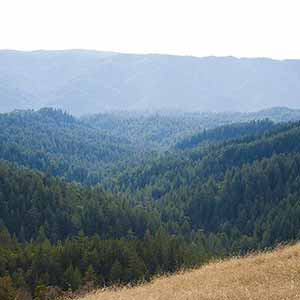 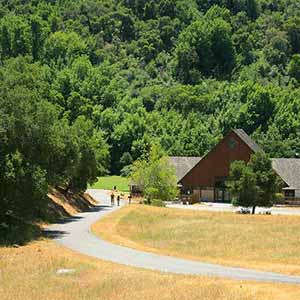 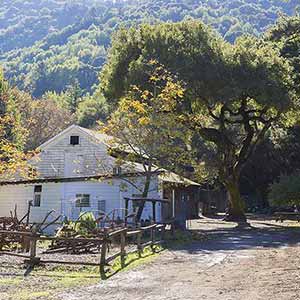 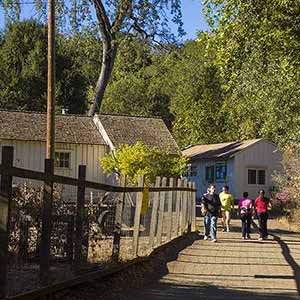 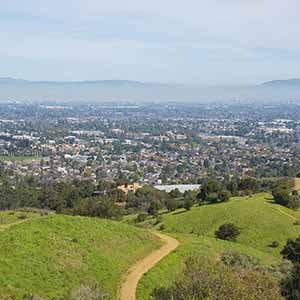