A trail is carved into Wedding Rock, one of the park’s main attractions

Sue-meg is a small state park on the rocky Trinidad coast. It’s dominated by a dense spruce grove and naturally doesn’t have any redwoods, but it’s only about 20 minute drive south of Redwood National Park.

The park was known as Patrick’s Point State Park until it was renamed in 2021. Sue-meg (pronounced “sue-may”, and with a lower-case “m”) is the original indigenous name for the area.

The park features some nice, easy trails along a scenic rocky coastline and through the wooded interior, but the main attractions are Wedding Rock, a huge rock formation that you can hike to the top of, and the long, wide Agate Beach. In winter, Rocky Point and the cove just north of Wedding Rock feature terrifyingly dramatic waves crashing into the sea stacks that loom over the shore.

(If you just want to see ocean views and aren’t camping or hiking, save the $8 day use fee by going to Luffenholtz County Park instead; this micro-park is just a few miles south of Sue-meg, has an even more impressive view, and is free).

The park has three campgrounds that are very similar to the Mill Creek Campground in that they’re spacious and spread out, with plenty of space between sites and lots of shrubs to isolate the sites. The campground is well away from the highway or any major roads and doesn’t get any traffic noise; instead, the constant white noise of the surf fills the camp. As a result the campground feels quiet and peaceful, even on summer holiday weekends.

Typically for a California state park campground, Sue-meg is mainly meant for drive-in tent camping. Although it’s much better for RVs than the older 1930s-era campgrounds, there aren’t any RV hookups and the winding roads and small pullouts aren’t ideal for larger vehicles.

It’s easier to get reservations here than it is in Redwood National and State Parks, but the campground still fills up on Saturday nights. The six ADA sites can only be reserved if you have a disability placard; any unreserved sites are available on a first-come, first-served basis when the kiosk opens in the morning.

Map of the Agate Beach Campground in Sue-meg State Park

Agate Beach is at the edge of a spruce grove and is the most attractive of the campgrounds. Most of the sites are out in the open and surrounded by dense shrubs. The best sites are the ones are at the edge of the spruce forest.

A nice benefit of the campground is the trail that leads down to broad, isolated Agate Beach.

The campground has five cabins that cost $80/night in winter and $100/night in summer. Just like the identical cabins at Prairie Creek and Jedediah Smith, each has four wooden sleeping platforms and not much else; there’s no kitchen or bathroom and you can’t use camp stoves inside. You even have to bring your own beddings. But the big benefits are the indoor heating, lighting, and electrical outlets.

Because it’s the smallest campground, Penn Creek has fewer people driving or walking around so it feels less busy than the other campgrounds. On the other hand, it’s the closest campground to the road so it can get a little traffic noise.

Penn Creek has a nice new bathroom and shower building that’s nicer than the bathrooms in the other campgrounds. Although the sites are in spruce woodland, most feel bright and open because there’s an open grassy area in the middle of the loop.

The best site is site 7, which is set back from the road and is under the spruce trees, providing lots of privacy. Site 8 is similar but with a little less privacy.

The largest of the campgrounds, Abalone is the most likely to have sites available on summer weekends. It feels a little busier than the other campgrounds since there are more people walking and driving around. It also has a darker look, since it’s entirely within the deep shade of a dense spruce grove.

Site 67 is set back from the road and is the most private site. I also like sites 50 and 52 since they have good privacy and are near a cove that produces lots of surf noise, although like all the other sites they don’t have a view.

Sue-meg has a pretty nice hike/bike area which is set well apart from the car campgrounds. The hike/bike area is part of a network of campsites intended for long-distance cyclists and thru-hikers who may not know where they’ll be each night. Hike/bike camping is available on a first-come, first served basis for $5/night, and you can’t bring a car. 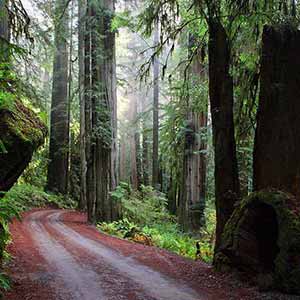 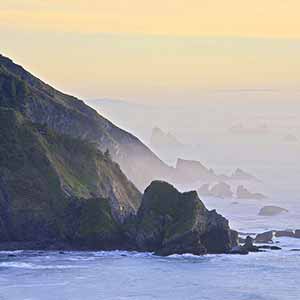 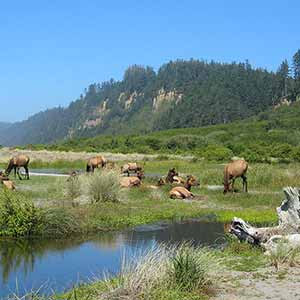 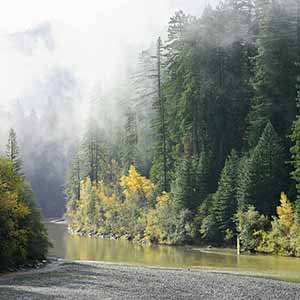