This trail has been closed since the Camp Nelson area burned in the 2020 SQF Complex fire.

The Belknap Complex has the best sequoia hiking in the Giant Sequoia National Monument. Although a small amount of logging was carried out in the 1920s, the sequoias apparently weren’t cut and today the grove appears remarkably well-preserved, with few obvious signs of logging.

The grove has two old-growth trails: the lowland Camp Nelson Trail, described here, and the upland Bear Creek Trail. Both of these trails have just a few short sections of sequoias, so you won’t see as many big trees as you would in, say, the Giant Forest. However, within those short sections, the scenery is just as good as the Giant Forest, and there aren’t any crowds.

The complex consists of the Belknap Camp, McIntyre, Wheel Meadow, and Carr Wilson groves. The name “McIntyre Grove” is sometimes applied to the whole complex.

The Nelson Trail runs along the bottom of a lushly wooded canyon, starting just outside Camp Nelson and passing through the Belknap and Wheel Meadow groves on it way to Quaking Aspen campground. For the first few miles it follows the Tule River, which is really more of a small creek. In this area there are some widely-scattered sequoias, mostly small to medium-sized, but with a few large trees. The woods are dense and lush and quite attractive, especially on cloudy days when the colors seem to be enhanced, the orangish sequoias standing out against the rich green foliage. After a few miles, the trail breaks away from both the creek and the sequoias for the final climb to Quaking Aspen.

Some visitors park at the end of the dirt road south of Cedar Slope, which would be much closer to the best sequoias of the hike. The road is deeply rutted in one area, but I’ve driven it in a regular car. Parking at the bottom of this road cuts a mile off the hike to the grove’s best sequoias, but the drive takes so long that you don’t actually save any time.

At the trailhead, the trail crosses a creek that may need to be forded, then begins a slight climb through sunny woods. The next few creek crossings have crude, homemade bridges. There aren’t any big sequoias for the first half mile, although some can be seen in the distance. Soon the woods get darker and denser and a few sequoias appear by the trail. This is part of Belknap Camp Grove. The sequoias grow within a dense thicket of very small pine trees; although no stumps are visible, usually this appearance means that the area has been logged. There’s very little groundcover and the area is rather dry-looking.

When you come to a cross trail, go left and then immediately right. To the left, the cross trail leads to the somewhat rough but drivable (in summer only) dirt road from Cedar Slope.

Shortly after the intersection, the trail crests a slight rise and enters a shallow basin containing a small but dense cluster of sequoias. This is the beginning of the Wheel Meadow Grove. The scenery improves a lot at this point; Wheel Meadow has its own distinctive look, bright and extravagantly green with ferns and leafy dogwood.

The first is in the shallow basin at the beginning of the grove; here the canopy is unusually open, almost meadow-like, with some whitewood snags in the middle. The small but striking sequoia cluster ends soon after the trail passes through the trunk of a mid-sized sequoia.

The second sequoia cluster is in a small ravine that the trail switchbacks through. The ravine doesn’t have the lushness of the surrounding forest, but it does have some big sequoias. Unfortunately, after just a few yards the trail climbs out of the ravine and leaves the interesting sequoia landscape behind.

The final cluster of sequoias comes just after the last creek crossing. The woods here are darker and the sequoias have a more deeply-furrowed look, indicating that, despite their size, they’re relatively young.

Soon after the last creek crossing, the trail leaves the sequoias and begins a climbing the hillside, ending in a meadow. This final section isn’t especially interesting. 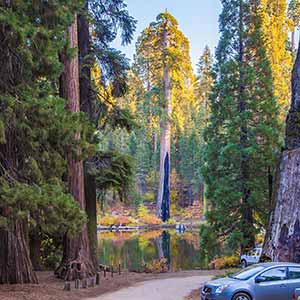 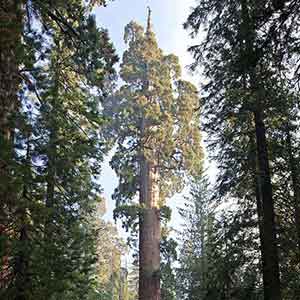 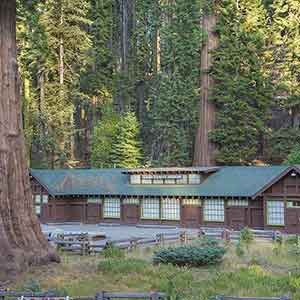